Discussion on the Dakar Rally - Reivews

Dakar Desert Rally has a fantastic feeling of scale and is capable of some fantastic, unique racing, but it's severely undermined by irritating control, variable performance, and numerous progression-killing bugs.

This environment reportedly weighs in at a whopping 20,000 square kilometres – what Saber Porto has described as the biggest racing game open world ever – but unfortunately there’s no way to get a sense of the full scope of it at launch. Disappointingly, free-roam driving and custom events are slated to arrive as updates later this year. The updates will be free but, combined with the fact Saber Porto has also relegated race team customisation and even replays to later updates, it all contributes to a feeling this thing just isn’t quite finished. Some games are released in early access, and some are just released too early.
It’s a problem, for instance, that on Xbox Series X Dakar Desert Rally’s Resolution Mode actually looks smoother than its Performance Mode. In Resolution Mode the framerate is pegged at a steady 30 frames per second, and that consistency keeps it looking suitably smooth. Performance Mode, which apparently sacrifices pixels for frames, looks considerably worse to my naked eye. It may indeed hit 60 frames per second when conditions are right but it’s certainly not locked there, and it flutters around noticeably when the screen is packed with sand-slinging competitors. The resulting unevenness is quite dreadful at times. I actually even thought the modes might have been mislabelled at first, but no – Resolution Mode is easily the pick. 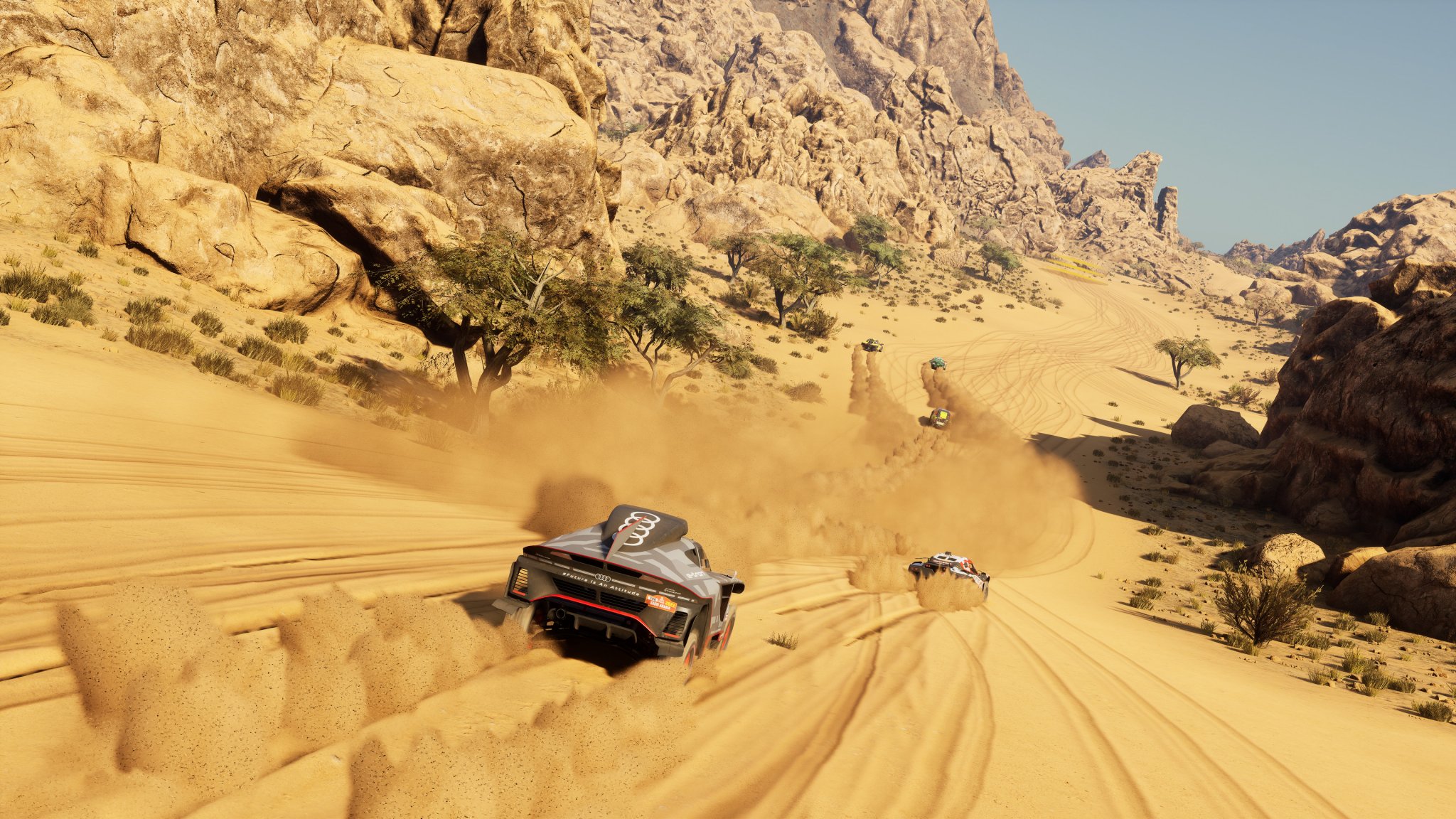 The growing list of bugs I’ve encountered certainly doesn’t help, either. There’s minor stuff, like the scratches and shattered windscreen on my Iveco Powerstar never completely going away regardless of how many times I pay for repairs, or the music still being audible on 0% volume, but the crippling autosave issue I’m currently experiencing on Xbox Series X is much worse. Piles of progress are disappearing after quitting, despite the autosave icon blinking away throughout. Quick-resume is a useful crutch, but losing XP levels, new vehicles, cash, and completed rallies – and being reverted to a random mid-race checkpoint from hours and hours ago – is enormously frustrating.
Equally frustrating is the handling model. Dakar Desert Rally includes a formidable assortment of rally raid machinery representing all the competing vehicle classes, and there’s a very good damage model here. Unfortunately there’s also a vast gulf between what’s fun to pilot and what absolutely isn’t. Quads are awful to ride, hopelessly sensitive to directional changes. Bikes are a little better – they don’t feel quite as delicate – but they’re still prone to regular losses of control. Handling for the cars and side-by-sides is a little more tameable than the bikes, but only mildly. The sense of weight while accelerating in a straight line, jumping, and taking gentle bends is fine, but anything beyond the slightest bit of oversteer is completely unsalvageable. It’s incredibly frustrating to get into a meek drift but be totally incapable of countersteering out of it; once you’re slightly sideways, you will spin out. Adding some angle to the steering in the tuning menus before a stage can help a little, but it’s not a complete fix by any stretch.
Anything beyond the slightest bit of oversteer is completely unsalvageable.

“
The trucks, however, feel great. Despite being the biggest and burliest vehicles available they are far and away the most fun to drive. They’re planted and stable despite their height, they feel confident and predictable landing from jumps, they can absorb impacts from opponents without spinning out, and they actually respond to countersteering. They’re not slow, either. I’d honestly be happy playing the whole campaign in the trucks alone, and I currently am. If only all my opponents could fit under all the start gates. Unfortunately, one event started me wedged behind an AI opponent who couldn’t do so, delaying the race start for 10 minutes – during which time I couldn’t pause and restart because I hadn’t been handed control yet.
Of course, I didn’t want to simply quit out because of my autosave issues, but when the identical thing happened on the eventual restart, I caved, quit, and restarted… and subsequently lost hours of progress.

It should be noted these rolling starts against rivals only occur in Dakar Desert Rally’s arcade-inspired Sport mode, which features giant, glowing waypoints and racing against packs of opponents from the get-go. It isn’t really representative of the real Dakar format but if you can tolerate the surprisingly aggressive AI it’s a better entry point for those who might be intimidated by the orienteering aspects of the higher difficulty levels. Professional mode, for instance, requires us to interpret directions explained in a road book and reach invisible waypoints. This is a satisfying challenge and a different sort of racing to anything I normally play, but it is undermined somewhat by the robotic co-driver whose advice isn’t as granular as the roadbook directions – his vague keep right/keep left calls can be particularly ambiguous.
I’m also not a fan of Saber Porto’s approach to scaling distances; Dakar Desert Rally’s map is purportedly a 1:5 scale riff on Saudi Arabia, but the studio has shrunken distances to match. This means a race listed at 70 kilometres is actually only a fifth of that, which is admittedly a fairly harmless quirk. Unfortunately, it also means when your co-driver warns you need to turn left in two kilometres, the reality is it’s only 400 metres – and you’re only seconds away from it, which is jarring and weird.
Weird, too, is the fact that competing in the actual Dakar race is locked behind a third difficulty level – Simulation mode – which can only be opened by hitting level 25. That’s something that requires many hours of bumbling around in the initial salvo of shorter, introductory rallies. I definitely don’t get why the titular event is gated like this; for casual players it’s essentially absent, and for hardcore racers it’s annoyingly out-of-reach for too long.
There actually isn’t really a great sense of campaigning as a real rally driver in a specific team here, overall. Dakar Desert Rally just tosses a random assortment of vehicles at us and says, ‘Go for it.’ The freedom to drive anything is nice, I guess, but it’s also a bit like F1 letting you turn up in a Ferrari one weekend and a McLaren the next. I love the historical cars Saber Porto has put in, too, but unlike the real thing they don’t get their own Classic class. This leaves ’80s icons competing against modern metal, which is pretty incongruous. Unlocking them is a punish, also, because it requires completing events five times (once in each class; yes, you have to ride a quad).

More from: Luke Reilly
1
With its absolute mountain of rally locations, WRC Generations ...
2
You could get away with it on GameCube, says ...
3
The Valiant is a serviceable, squad-based RTS with a ...
4
The shooter has been developed in collaboration with YouTube ...
Filed under game ,  Dakar Desert Rally

Most Popular This Week
1
The brilliantly acted Women Talking balances the theatrical and ...
2
Marvel's Midnight Suns Review
3
Violent Night brings the Christmas spirit to a gore-first ...
4
Netflix’s Scrooge: A Christmas Carol manages to delight thanks ...
5
Here's IGN's review of Disney+ new Willow series directed ...
6
Puss in Boots: The Last Wish Review
7
Dash is a devious and thrilling one-take adventure through ...
8
The HyperX Cloud Stinger 2 offers good performance in ...
9
Andor is one of the very best TV shows ...
10
Luca Guadagnino’s cannibal road-trip romance is richly conceived and ...